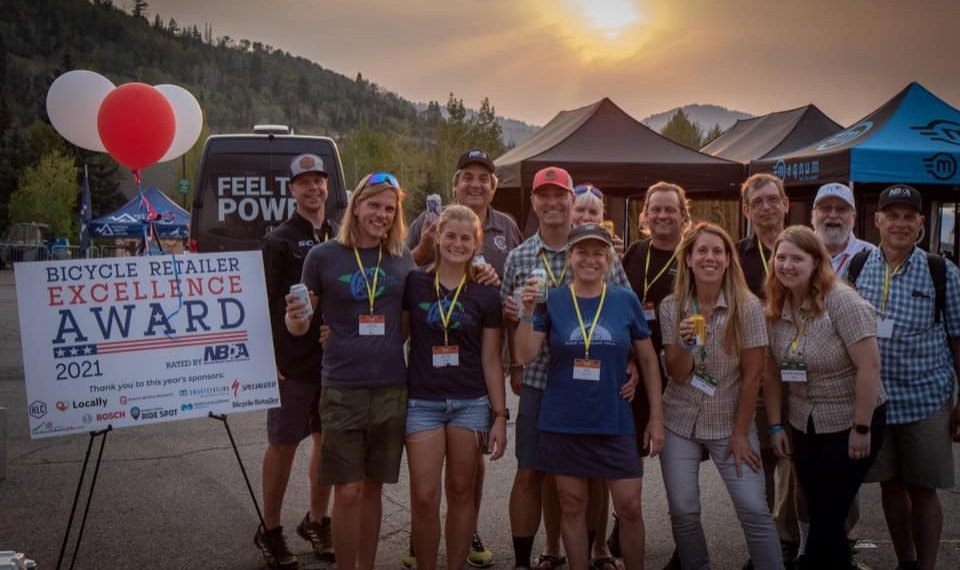 Key to certification is a lengthy application survey that quantifies key elements found in successful retail operations of all kinds. The retailers were also evaluated through phone & email contacts, website appeal & accuracy, and marketing expertise. The process of going through the application and the outside perspective of the NBDA staff have created a program in which every shop has the opportunity to recognize their strengths and weaknesses and become the very best retailer they can be. The People’s Choice component is solely voted on by the retailers customers. Winning both accolades is a great honor. With that said, Mystic Cycle Centre earned the most votes for a single-location People’s Choice recipient.

When asked what defined a Bicycle Retailer of Excellence, Co-Owner, Allison (Souza) Palmer remarked, "A Bicycle Retailer of Excellence (BRE) proves their excellence with action. It is easy to say you're good at something, but unless you can prove it, what action have you actually taken? Also, a BRE has a responsibility to act with care and create positive impact that extends beyond the walls of the brick and mortar location. Their goodwill efforts should positively impact the wellbeing of their local community. A BRE is an exemplary role model within the cycling community. They are committed to shattering the glass ceilings and bridging the gaps that exist within the sport. A BRE recognizes the need to improve compensation packages to allow team members the opportunity to create a career within the industry, rather than be a stepping stone. A BRE sets the stage for other bike shops and hopefully inspires them to do better and be the best version of their organization. A BRE also motivates others within the community, including cyclists, to see a different perspective that varies from the historical view that the sport has painted. A BRE takes care of their customers with the utmost dedication to problem solving and genuine concern. A BRE makes each and every customer feel valued, welcome and connected."

The Bicycle Retailer Excellence Award requires not only great shopping experiences and expert leadership and staff, but also support for their local community and national cycling advocacy. Each retailer awarded fits these criteria and more. The local bicycle retailer is not only a store, but also a pillar of a community. By being given this award, Mystic Cycle Centre has proven that they exemplify this ideal.